Here are some important terms used generally in telephony, and specifically with FreeSWITCH. The terms can sometimes be confusing, and trip up understanding; hopefully this glossary will help.

TODO What's also needed is a broad but precise conceptual overview, written for the layman.

A call leg is an inbound or outbound connection between the phone switch and an external party.

In FreeSWITCH, a channel represents a call leg.

Set of XML files that parse the call details and decide where to route the call.

Telephony protocols such as SIP/H.323 and POTS lines.

Make a page of the same name under Event System, where the all the relations (and differences) between Event Socket Library, Event Handlers, mod_esl (what else is related) is explained (see SO threads 1, 2, 3). That page would also be perfect to have their common features explained in one place. For example, inbound and outbound modes; there are descriptions (of different depth) at mod_event_socket, mod_erlang_event, Event Socket Library, Event Socket Outbound, mod_dptools: event, etc. ("etc.", as in find them).
In the end, this section will just point to that page.

Generally refers to a method to subscribe to FreeSWITCH events via the event system through the network.

This implies that one can connect to the same local machine via the network. This is what fs_cli does, when launched on the same machine where the FreeSWITCH instance runs, using the network socket (or TCP/IP socket) 127.0.0.1:8021.

There are built-in ways to do this (Event Socket Library (ESL), Event Handlers), or one could roll their own solution by writing a FreeSWITCH module.

The counterpart to having a user register to your FreeSWITCH server is to have your server register as a user on a remote server. This is accomplished using gateways. A gateway is quite simply an outbound registration to another SIP server. Telephone service providers use very large servers to provide SIP trunks to their subscribers. In FreeSWITCH, we can use a gateway to connect to a SIP provider. We can also use a gateway to connect to another SIP server, such as another FreeSWITCH server or any SIP-compliant IP-PBX.

The connection between a subscriber and the end office of a telecommunications service provider; also referred to as last mile.

PBX stands for Private Branch Exchange, which is a private telephone network used within a company or organization. The users of the PBX phone system can communicate internally (within their company) and externally (with the outside world), using different communication channels like Voice over IP, ISDN or analog. A PBX also allows you to have more phones than physical phone lines (PTSN) and allows free calls between users. Additionally, it provides features like transfer calls, voicemail, call recording, interactive voice menus (IVRs) and call queues.

In the Integrated Services Digital Network (ISDN), there are two levels of service:

Both rates include a number of B-channels and a D-channel.

The Basic Rate Interface consists of

Thus, a Basic Rate Interface user can have up to 128 Kbps service.

The Primary Rate Interface channels are carried on

and are typically used by medium to large enterprises. The Primary Rate user is hooked up directly to the telephone company central office.

A PRI consists of

Thus, a Primary Rate Interface user can have

The 23 (or 30) B-channels can be used flexibly and reassigned when necessary to meet special needs such as video conferences. PRI uses the Q.931 protocol over the D-channel.

For more information, see ISDN. To compare ISDN data rates with other technologies, see The speed of....

In the strictest sense of the word, a SIP profile in FreeSWITCH is a User Agent. In practical In practical terms, this means that each SIP profile "listens" on a particular IP address and port number. The internal profile listens on port 5060, and the external profile listens on port 5080. Not only does the profile listen but it can respond as well. For example, when a phone sends a SIP REGISTER packet to FreeSWITCH (at port 5060), the internal profile "hears" the registration request and acts accordingly. The files in conf/sip_profiles/ are ones which determine how the profiles behave. Many of the parameters in these profiles are to customize how FreeSWITCH handles various SIP traffic scenarios. In most cases the defaults are reasonable and should work. In other cases, though, you may find that because of the peculiarities in various VoIP phones and vendors, you will need to make adjustments. Lastly, do not let the profile names internal and external be a source of confusion. Each profile is simply a user agent that is streamlined for a specific purpose. The internal profile is optimized to handle telephone registrations and calls between registered phones. The external profile is optimized for outbound gateway connections and several NAT traversal scenarios.

For a deeper discussion of user agents and the concept of a back-to-back user agent (B2BUA) see wikipedia article about this.

A softphone is a software program for making telephone calls over the Internet using a general purpose computer rather than dedicated hardware. The softphone can be installed on a piece of equipment such as a desktop, mobile device, or other computer and allows the user to place and receive calls without requiring an actual telephone set.

A softswitch (software switch) is a call switching (see above) node in a telecommunications network,

based not on the specialized switching hardware of the traditional telephone exchange,

but implemented in software running on a general-purpose computing platform.

Like its traditional counterparts it connects telephone calls between subscribers or other switching systems across a telecommunication network.

VoIP softswitches are subdivided into numerous classes, in analogy to the traditional functions in the public switched telephone network.

There are five classes of switches, one through five, referring to the size of the area they cover. 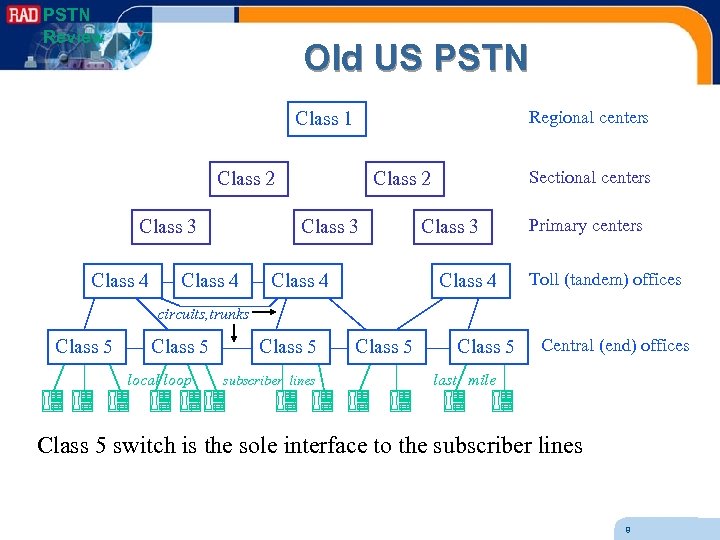 Class 4 softswitches, analogous with other Class 4 telephone switches, are used for transit VoIP traffic between carriers.

Their main function is to route large volumes of long-distance VoIP calls.

The most important characteristics of Class 4 softswitch are

A telco, also known as a

The government agencies are often referred to, primarily in Europe, as PTTs (postal, telegraph and telephone services).[2]

While most URI schemes were originally designed to be used with a particular protocol, and often have the same name, they are semantically different from protocols. For example, the scheme http is generally used for interacting with web resources using HTTP, but the scheme file has no protocol.

VoIP (voice over IP) is the transmission of voice and multimedia content over Internet Protocol (IP) networks. VoIP historically referred to using IP to connect private branch exchanges (PBXs), but the term is now used interchangeably with IP telephony.